I'm a bit of a couch potato when I'm not online, studying or working. I hate soaps and reality; I love animation, absurd comedy and (serious and less serious) science fiction.

Liz Lemon is head-writer for "The Girlie Show". The relationship between Liz and her boss Jack Donaghy is, uh, well let's say, somewhat peculiar...

Jack Donaghy: "I want you on this, Lemon. Those jokes you wrote for my Mitt Romney fund raiser, they were top-notch."
Liz Lemon: "Those weren't jokes! That was an appeal for a return to common sense and decency."
Jack Donaghy: "Well, they got big laughs."

Daughter Wednesday is trying to convince Lurch to attend the Butlers' Ball...

Wednesday: "It'll be fun."
Lurch: "I like being miserable."
Wednesday: "You might find a nice girl to be miserable with!"

Who's to say that theoretical physicists have no sense of humour?

Community college has never been this much fun!

According to insiders, this is a frighteningly accurate representation of nowadays Hollywood.

Hollywood agent Ari Gold: "The next one after 'Queens Boulevard' is a studio picture. I'm talking franchise, baby! We'll get you the lunchbox. And an action figure with a monster cock."
Movie star Vincent Chase: "It's definitely tempting."
Ari Gold: "I love you!"

About asteroids: "It is only a matter of time before the Earth is hit again."
About climate change: "A growing number of experts fear Britain could be heading for a climate like Alaska."
About 'freak waves': "These are not tsunamis or tidal waves, but huge breaking walls of water that come out of the blue. Waves the height of an office block."
And about super volcanoes: "Only a handful exist in the world, but when one erupts, it will be unlike any volcano we have ever witnessed."

Homer often gets himself into trouble, and most of the time without realizing it. This is the rare exception to the rule.

Homer: "I'm not normally a religious man, but if you're up there, save me Superman!"

Dr. Phlox: "It's unethical to harm a patient. However, I can inflict as much pain as I like."

B'Elanna Torres: "The Borg wouldn't know fun if they assimilated an amusement park."

Third Rock from the Sun

Sally: "Did you loose weight?"
Dick: "No, even better. I bought bigger pants!"

You could say I'm a film freak. I go to the cinema almost every week. I can't afford that, but fortunately, Studium Generale of the Eindhoven University of Technology (TU/e), is showing a lot of great films in "De Zwarte Doos". Chances are that you'll bump into me there one day. 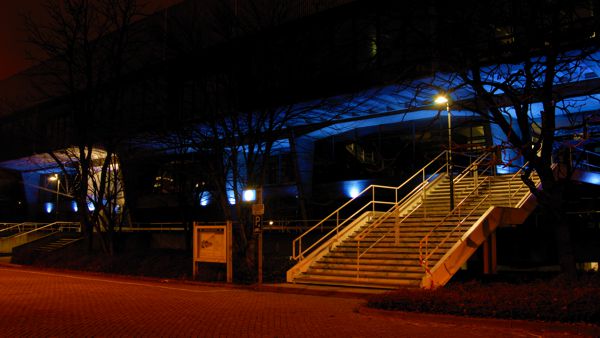 Campus of the Eindhoven University of Technology (TU/e). Copyright © Robbetje®.

I'm a collector of film quotes. I'll try to publish one on this web page every day.

Deckard: "You're reading a magazine. You come across a full-page nude photo of a girl..."
Rachael: "Is this testing whether I'm a replicant or a lesbian, Mr. Deckard?"

15-year-old William Miller (Patrick Fugit) is given the chance to write a story for Rolling Stone Magazine about an up-and-coming rock band. He starts his article with: "I'm flying high over Tupelo Mississippi with America's hottest band, and we're all about to die..."

"Anyone can cook Aloo Gobi (a vegetarian cuisine dish made with potatoes and cauliflower), but who can bend a ball like Beckham?"

Rick Deckard: "I have had people walk out on me before, but not when I was being so charming."

The first Batman film without the word "Batman" in the title. And with an unforgettable Heath 'The Joker' Ledger: "The only sensible way to live in this world is without rules!"

Banksy: "Eeeh, you know... It was at that point that I realized that maybe Thierry wasn't actually a film maker, and he was maybe just someone with mental problems who happened to have a camera."

In almost every Coen Brothers' film Steve Buscemi dies ingloriously. All that remains of Steve in this film is the lower part of one of his legs.

Judge to Frank Bannister: "Give it up, Frank! Death ain't no way to make a living!"

Enid: "How can you stand all these assholes?"
Rebecca: "Some people are ok, but mostly I just feel like poisoning everybody."

Enid: "That rules!"
Rebecca: "No, it really doesn't. You'll see, you get totally sick of all the creeps and losers and weirdos."

So close! Damn those @#$$%!! American capitalists!

Record store owner Rob Gordon about his staff: "I can't fire them. I hired these guys for three days a week and they just started showing up every day. That was four years ago."

Question: "What's the most resilient parasite?"
Answer: "An idea."

Juno MacGuff (16) discovers she is pregnant and decides to give the baby up for adoption. Or as her stepmother eloquently puts it: "Somebody else is going to find a precious blessing from Jesus in this garbage dump of a situation."

Dave Lizewski (superheroe without superpower): "So, how do I get a hold of you?"
Hit Girl (innocent looking, but extremely dangerous 11-year-old vigilante): "You just contact the mayor's office. He has a special signal he shines in the sky; it's in the shape of a giant cock."

In memory of Jacques-Yves Cousteau and with gratitude to the Cousteau Society, which was not involved in the making of this film.

The cowards at EMI backed out when they believed the script to be 'blasphemous'. So I'd like to thank ex-Beatle George Harrison. No, not for his dull music, but for financing this great film. And for dialogues like...

Brian: "You have to be different!"
The mob: "Yes, we are all different!"
A little voice in the distance: "I'm not!"

Grand-daughter Olive: "Grandpa, am I pretty?"
Grandfather Edwin Hoover: "You are the most beautiful girl in the world."

Olive: "You're just saying that."
Grandfather: "No, I'm madly in love with you and it's not because of your brains or your personality."

I lived in Kyoto for two years, so I (almost) felt at home.

No, protagonist Liane Balaban looks like Natalie Portman (Padmé Amidala from Star Wars Episode 1, 2 and 3), but it's not her.

My personal hero, Peter Gibbons: "It's not that I'm lazy, it's that I just don't care."

Max Fischer (15) finally has found something that he and his pretty elementary school teacher Miss Cross have in common: "We both have dead people in our families."

Dr. Twardon (Patrick Bauchau) summarizes the film like this: "Who's to say that love needs to be soft and gentle?"

I'll let the tagline of this film speak for itself: "See our family! And feel better about yours."

Blood, babes and dialogues like...
Ronnie: "Remember, we don't have to deliver every last inch of the man Brian!"
Brian: "You're right Ronnie. Lend us your knife..."

This is what a Dutch television guide had to say about this film... This is by far the best Star Trek film ever. The plot of the story is based on "The Best of Both Worlds". In that episode from "The Next Generation", captain Jean-Luc Picard of the USS Enterprise is tortured by the Borg, a cybernetically-enhanced race which forcibly assimilates other sentient species into its structure and hive-mind.

First Contact has grand special effects, and the story from director Frakes (commander William T. Riker) is intriguing and great fun. Even for non-Trekkies this film is hard to resist. Or as the Borg would say: "Resistance is futile."

This pretentious ponderous collection of religious rock psalms is enough to prompt the question: "What day did the Lord create Spinal Tap, and couldn't he have rested on that day too?"

I don't know why, but I just love animation!

Care for a game?

"The 1985 movie 'Brewster's Millions' is the 7th film adaptation of George Barr McCutcheon's novel. In what year did he write it?"

Do you know the answer?

"Statistics are to baseball what a flaky crust is to Mom's apple pie."

Statistics are like bikinis. What they conceal is more important than what they reveal.